The mega-successful Marvel Cinematic Universe is, at its heart, a big-screen adaptation of what Stan Lee and his bullpen of underappreciated artists did at Marvel Comics back in the 60s: have superheroes from different comic books team-up and engage in covert acts of multi-level marketing. The home of Iron Man, Thor and Captain America (with a joint custody agreement now in place for Spider-Man) has become a movie hit factory, and rival studios have been quick to imitate their lucrative shared universe formula. Marvel, though, aren’t the first to attempt such a feat. There’s an older, spandex-free cinematic universe, and that one’s held together by a haggard, bespectacled Jewish detective who goes by the name of John Munch.

Played by stand-up comedian turned actor Richard Belzer, Detective John Munch made his debut in one of TV’s greatest ever cop shows, Homicide: Life on the Street (1993-1999). The show was set in Baltimore and based on a non-fiction book by the city’s former crime reporter David Simon. He later went on to create the critically-acclaimed and not altogether dissimilar Charm City-based epic, The Wire (2002-2008). Homicide featured a strong ensemble cast, with Belzer appearing alongside Andre (Brooklyn Nine-Nine)  Braugher, Yaphet (Live and Let Die) Kotto and Ned (Mister Loo-Thor) Beatty. Belzer’s Munch was a veteran cop with a weakness for sardonic humour, dysfunctional relationships and conspiracy theory. There was nothing in his early appearances to indicate a tendency to commute between fictional universes.

That would come later.

The Secret Origin of John Munch

Munch was based on real-life Baltimore homicide detective Jay Landsman. After retiring from doing actual police work, Landsman became an actor who pretended to be a cop in The Wire, a show that already had a character named after him (as did Michael Chabon’s 2007 novel, The Yiddish Policeman’s Union). When Homicide ended in 1999, Munch took the unusual step of getting a transfer to another fictional precinct. He became a regular on the New York-based show Law and Order: Special Victims Unit, the first of many, many Law and Order spin-offs. Munch remained there until his on-screen retirement party in 2013, where he reminisced with characters from Homicide some 14 years after that show’s finale.

This, it’s worth noting, is not a typical career trajectory for a fictional TV cop.

When TV shows come to an end, popular characters often find themselves headlining spin-offs à la Frasier, Better Call Saul or, if you must, Joey. Members of recently deep-sixed ensemble cop dramas don’t tend to join the cast of rival ensemble cop dramas. Actors might do that sort of thing, but characters generally don’t. Andy Sipowicz from N.Y.P.D. Blue didn’t subsequently turn up in CSI, The Shield or Line of Duty, and that a shame. It would have been ace.

TV has no shortage of maverick cops who don’t play by the rules. Munch went further, though, and defied the rules of the genre. He was aided and abetted by Tom Fontana and Dick Wolf, the creators of Homicide and Law and Order. They were old friends who thought it’d be fun to have their shows crossover, like old friends often do. This established that both sets of characters worked in the same fictional universe, which is useful when you’re looking to change jobs. Just ask Munch.

Munch gets a reputation

The first crossover was a 1995 Homicide episode titled ‘Law and Disorder’, a title as on-the-nose as Munch’s spectacles. Three subsequent crossovers followed, where a story set up in one show would be resolved in the other. Detective John Munch featured prominently in all these episodes, an early sign of his police procedural promiscuity. In 2000, the character made a cameo appearance in the short-lived Mark Ruffalo-starring cop show, The Beat. He also appeared in 2008’s penultimate episode of The Wire in a scene featuring his source material, Jay Landsman. More recently, he got a shout-out on the BBC drama, Luthor, when Wire alum Idris Elba’s eponymous DCI told a fellow cop to contact ‘Detective Munch in New York’s Special Victims Unit’.

But it wasn’t just cop shows: Munch was trying out different genres, too. A Vince (Breaking Bad) Gilligan-scripted X-Files episode from 1997 featured Munch interrogating one of Fox Mulder’s hacktivist pals, The Lone Gunmen. This was a flashback episode set in 1989, making it a prequel of sorts to both Homicide and The X-Files. It also explains Munch’s subsequent penchant for dark suits and conspiracy theories.

So, our John Munch Cinematic Universe already contains Homicide, Law and Order (and, presumably, all its various offshoots, including the UK one with Bradley Walsh),  The Wire, Luthor and The X-Files. This raises a troubling question: are the grisly murders investigated in these shows rendered meaningless because, you know, aliens?

Much has been made of Marvel Studios recent foray into sitcom territory with their terrific WandaVision show on Disney+. Munch, though, colonised this genre years ago. The JMCU contains the disgraced Bluth family from the cult sitcom Arrested Development (2003-19). Munch appeared in a 2006 episode, targeting hapless Bluth in-law Tobias Fünke in a scrapbooking-themed sting operation. As Ron Howard’s in-show narrator explained: ‘The scrapbooking sting had helped the D.A. gather evidence against people as diverse as Ken Lay, Oliver North, but ironically not Martha Stewart’.

The JMCU also contains any show that’s crossed paths with shows that exist within the JMCU. Two characters from the 80s medical drama St Elsewhere appeared in episodes of Homicide (Alfre Woodard’s Dr. Roxanne Turner and Ed Begley Jr’s Dr. Victor Ehrlich). St Elsewhere was no stranger to crossovers itself, and some claim it has an equally-bonkers TV universe of its own. That hypothesis relies heavily on its John Munch connection, however, as he did most of the heavy lifting. It makes more sense to say that St Elsewhere is part of John Munch’s Cinematic Universe. St Elsewhere crossed paths with vintage sitcoms Cheers, M*A*S*H,and The Bob Newhart Show, so they’re now part of the JMCU by proxy, as are any shows that they crossed over with.

They’re all in the JMCU, too.

The MCU doesn’t seem quite so ambitious now. At least its constituent parts operate within the same genre and its key players all wear similar outfits. In the JMCU things are wilder and a lot more freewheeling. It doesn’t even respect the boundaries of its medium. In 1993, Munch gate-crashed The World’s Most Dangerous Party, an album by chat show legend David Letterman’s bandleader, Paul Shaffer. The album featured celebrity cover versions of classic songs in a faux house party setting. Munch interrupted the final track after neighbours complained about the noise.

Marvel often takes bold, creative choices with their superhero properties. Their Guardians of the Galaxy, for instance, include a sentient raccoon and tree. The JMCU, however, jumped the species barrier years ago. A 2006 Sesame Street episode featured a parody entitled Law and Order: Special Letters Unit. It featured a haggard, bespectacled Munch muppet (not voiced by Belzer, alas) investigating the case of a missing letter ‘M’ and contained the immortal line “Enough chung-chunging already!” It was, of course, delightful.

Munch also turned up in comics, too. The third volume of Alan Moore and Kevin O’Neill’s fiendishly clever graphic novel series The League of Extraordinary Gentlemen contained a text story set on a moonbase in 1969 (remember those?). The base is under attack from Selenites (the lunar critters from H.G. Welles' First Men in the Moon), and there’s a Pete Munch onboard who’s clearly meant to be John Munch’s father. In case there’s any doubt, Munch Sr works alongside a Bayliss and a Rawls, surnames of two prominent characters from Homicide and The Wire. Both shows were famously set in Baltimore, and the original astronauts from Jules Verne’s novel From the Earth to the Moon were members of the Baltimore Gun Club. You can probably guess how they made the journey.

More recently, Munch himself appeared in illustrated form in a 2016 Spider-Man/Deadpool Marvel comic. During a chase scene on a Hollywood movie lot, Deadpool accidentally interrupts filming of some John Munch TV series that’s popular on Earth-616. The irreverent Merc With a Mouth asked hopefully: ‘Does this mean we’re part of the Munchiverse?’

It seemingly does, but not in the way he thinks.

That same year saw the release of Marvel Studios’ Captain America: Civil War, directed by Joe and Anthony Russo. The Russo Brothers started their careers making TV sitcoms like the aforementioned Arrested Development before going on to make some of the most successful movies ever made. During Civil War’s climactic Airport-set superhero battle, eagle-eyed moviegoers noticed a blink-and-you’ll-miss-it background detail. A vehicular cameo, if you will. It was the Bluth family stair car, an unmistakable prop synonymous with Arrested Development. 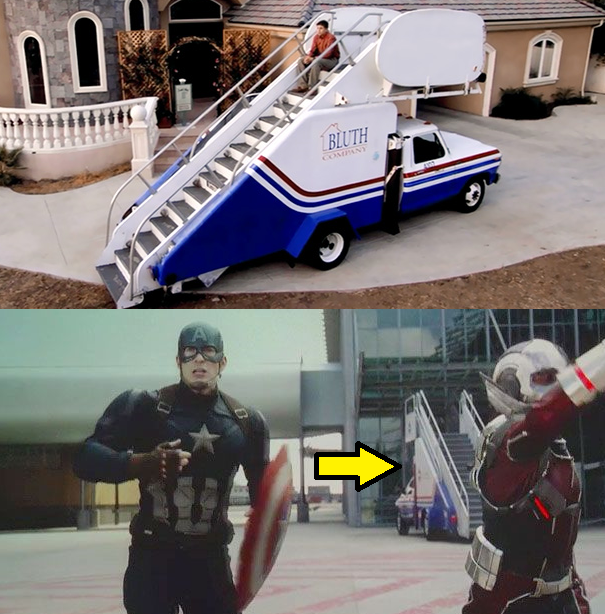 Does this suggest that the dysfunctional Bluth family of Arrested Development reside in the Marvel Cinematic Universe? Of course it does. There is, however, an even weirder possibility. The Bluth family stair car links the MCU to Arrested Development. John Munch appeared in Arrested Development, which means it takes place in the same, ever-expanding Munchiverse that includes Homicide, Law and Order, The Wire, The X-Files, Luthor, St Elsewhere, Cheers, Frasier, M*A*S*H, The Bob Newhart Show, anything with ‘Chicago’ in its title, and – somewhat tenuously – Sesame Street.

Which makes the MCU just a small corner of a larger, wilder and much more freewheeling John Munch Cinematic Universe.