The recent announcement that the Bank of England are planning to bail out the struggling musical fad Northern Soul has provoked fierce criticism from politicians, economists and rival has-been music genres like Britpop, Disco & Skiffle.

Opposition MPs are calling on the Bank of England Governer Mervyn King to resign, accusing him of setting a dangerous precedent and of letting his taste in music interfere with policy making decisions.  “It’s no secret that that Mr King has one of the countries’ largest collection of Stax & Volt 7” singles,” claims Dek Moonlove, the opposition spokesman for Soul, Gospel & Classic R’n’B.  “He often brings a copy of Uncut Magazine to Monetary Policy Meetings and he won’t do business with people who listen to Radio 1.  There’s even been rumours that he subjects Bank of England staff to random iPod checks.”

Northern Soul originated during the heady days of the 1960’s amongst the nightclubs, dance halls and cobblestoned cotton mills of Northern England.  “It gave a real boost to the North,” claims Manchester-based music journalist and ubiquitous pop culture pundit Stu Macaroni.  “Before it came along, soul was very much restricted to the South.”

Eschewing the chart-topping, radio-friendly soul sounds of Tamla Motown, the Northern Soul movement embraced more obscure songs produced by lesser-known artists on record labels nobody had heard of.  In many cases the songs were so obscure the artists couldn’t remember recording them.

Fans dressed in their regulation Ben Sherman shirts, drainpipe trousers and stovepipe hats would travel from all over the country to dance energetically at legendary Northern Soul venues like the Wigan Casino, the Blackpool Mecca and the Scunthorpe Labour Exchange.  Over time, however, its popularity declined.  Cut-price entrance fees and an irresponsible door policy led to a street-credibility crisis.  During the 1980s many of the venues were turned into bingo halls which further undermined the scene as it became increasingly difficult to energetically dance between tables of pensioners.

The Bank of England’s announcement this week has come as something as a surprise to financial commentators.  “Frankly, we didn’t see it coming” admitted a Music Fad Analyst from Morgan Stanley.  “We reckon he did it to impress Beyoncé.”  Last year, a Channel 4 Dispatches programme revealed that Mervyn King ‘fancies Beyoncé.’

For fans of other extinct musical fads, though, the news has provoked anger and outrage.  “It seems to be one rule for Northern Soul and another rule for the rest of us” claims Narcolepsy Mulchbucket, the publisher of seminal Britpop fanzine (What’s The Story) Parklife People?   “When the Britpop bubble burst in the late 1990s we went to

[then Governor] Eddie George with plans for a rescue package.  He said it wasn’t Bank policy to assist retro-sounding indie guitar bands and told us all to ‘Sod off and get a job.’”

“It’s a disgrace,” snarled Shakka Cohen, the outspoken president of the non-governmental organisation ‘Disco International’ [which inspired the 1980 Top 10 hit for French band Ottewan, ‘D.I.N.G.O’].  Dressed in a white polyester suit, an unbuttoned black silk shirt and a cocaine moustache, he said: “Disco didn’t have to die: it was a victim of institutional neglect. And who’s responsible for this?  I don’t blame it on the sunshine, the moonlight or the good times – I blame it on the Bank of England.” 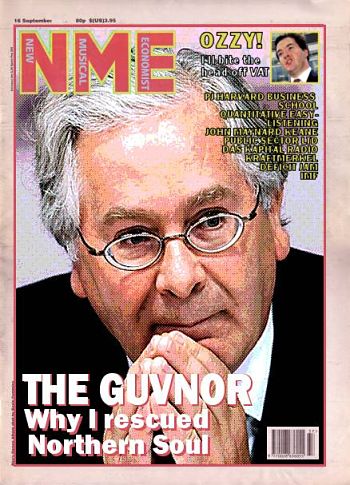