Marvel’s Daredevil returns to Netflix-subscribed screens this weekend. To celebrate this, let’s have a timely look at some of the comics that have poked fun at everyone’s favourite visually-impaired vigilante:

Blind attorney and amateur chef Mutt Murdoctor (AKA Splat Murdock) secretly – and somewhat incompetently – fought crime as Scaredevil (AKA Duhdevil) in Marvel’s parody comics Not Brand Echh (1967-69) and What The–?! (1988-1993). 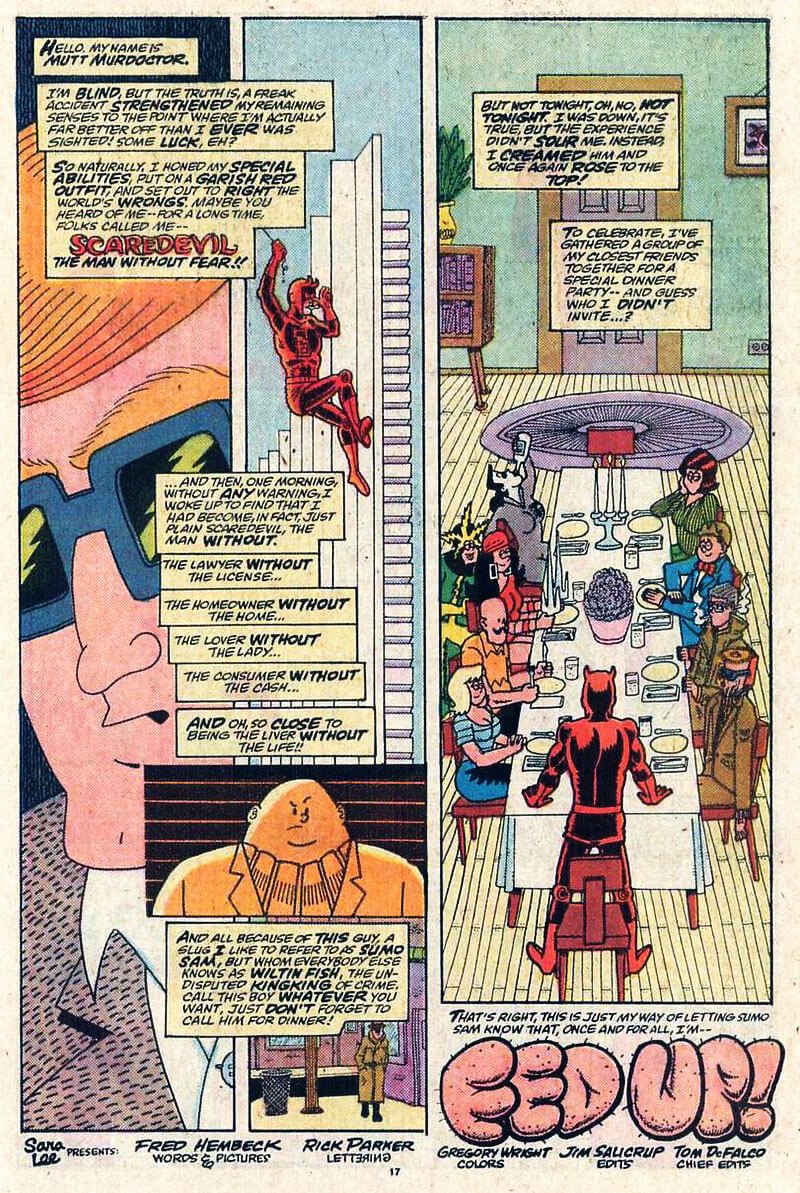 Veteran British comics writer and Judge Dredd co-creator Pat Mills never cared too much for superheroes, so when he and fellow 2000ad alum Kev O’Neil created a comic for Marvel’s ‘mature readers’ Epic imprint in the mid-1980s they decided to really put the boot in. Set in a dystopian future where capes and superpowers are commonplace, the eponymous Marshal Law was a government-sanctioned “hero hunter” tasked with eliminating rogue superheroes. In Marshal Law Takes Manhattan, he encounters grotesque parodies of major Marvel superheroes, including Spider-Man, Captain America and – of course – Daredevil.

He’s not identified by name, but you can tell it’s Daredevil because he keeps running in the wrong direction and he wears a costume with horribly mismatching colours.

The TMNT comic series made its debut in 1983 and was originally a parody mash-up  of the hottest comics of the time, including X-Men spin-off The New Mutants (which contained numerous teenage mutants) and Frank Miller’s seminal run on Daredevil (which featured lots of ninjas). Long before it influenced the Netflix show, Miller’s Daredevil was a big inspiration behind Donatello, Leonardo, Michelangelo and Raphael – possibly more so than even the Italian Renaissance. For one thing, they shared an uncannily similar backstory to Ol’ Hornhead – in one version of the TMNT origin story, it was strongly hinted that the radioactive sludge that mutated our Heroes in a Half Shell came from the same truck that blinded young Matt Murdock. Both Daredevil and The Turtles were trained by wood-themed mentors (a man called ‘Stick’ and a rat called ‘Splinter’), and would often get into conflict with menacing appendage-themed ninja gangs (‘The Hand’ and ‘The Foot Clan’).

Alan Moore is one of the world’s most respected and influential comics writers. He deconstructed the superhero genre with Watchmen, autopsied the Victorian era with his Jack the Ripper thriller, From Hell, and inspired a global protest movement’s wardrobe with V for Vendetta. Before any of that, however, he mercilessly ripped the piss out of Frank Miller-era Daredevil for shits and giggles. 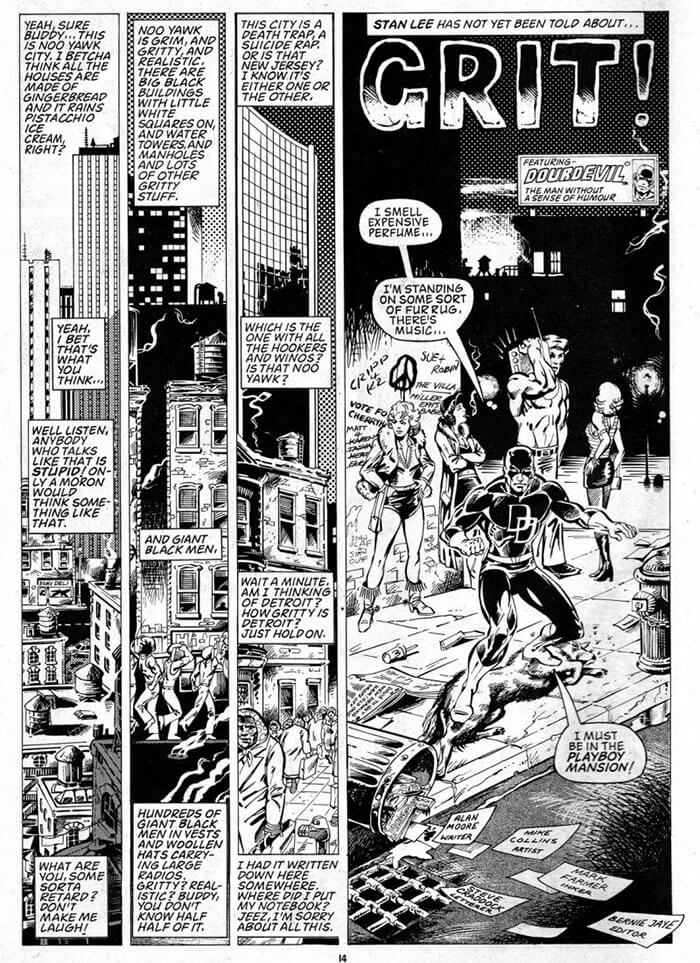 You can find the whole goddamn thing here.

Many of the these parodies focus on Frank Miller’s early-80s Daredevil work, which made his name in the industry and transformed Daredevil from a swashbuckling sub-par Spider-Man to the comics noir crimefighter that Netflix subscribers know and love. Miller was not averse to a Daredevil parody himself, though, as this one-page strip from Marvel’s classic alternative universe comic What If? proves: 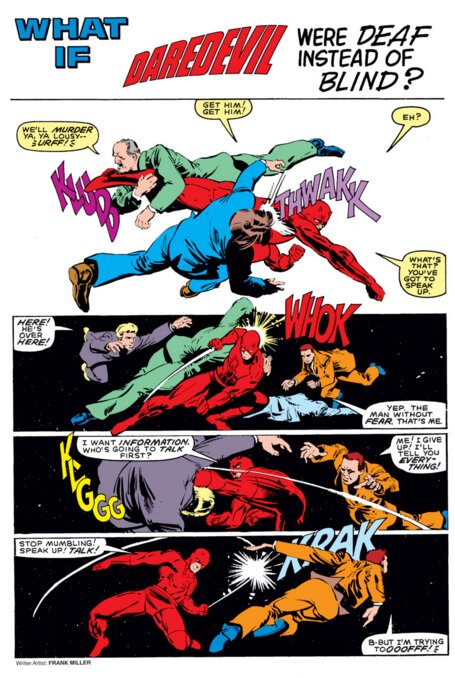 Granted, it’s not the best thing Miller’s ever done, but it’s damn sight better than some of his more recent work.

Some things go beyond parody.