Here’s an interview I did with cult filmmaker Alejandro Jodorowky in 2002 about his highly acclaimed and utterly bonkers comics work. Back then, his early films El Topo and The Holy Mountain were fiendishly difficult to get hold of due to a decades-long feud between Jodorowsky and Allen Klein, the former Beatles and Rolling Stones business manager who owned the rights to the films. The two men had a reconciliation shortly before Klein’s death in 2009 and both films have since been released on blu-ray and DVD.

‘Alejandro’ or ‘Alexandro’?  I’ve seen it spelled both ways, but I figure you’d have the definitive answer.

[Consequently] for the US it would be Alexander.  I like that my name offers little variation possibilities, therefore, I do not identify myself with any.

Many comics readers [myself included] first discovered your work during the 1980s with the publication of The Incal.  For those unfamiliar with the details, can you tell us how this remarkable collaboration with Moebius first came about?

We worked together on the script of Dune for about two years, but in the end the movie did not get picked up.  The script contained at least 3000 drawings, the majority by Moebius, some by [H.R.] Giger, [Chris] Foss and others.  Dune by Herbert is a very literary book, therefore we had to create about 50% of visual scenes. Moebius suggested that we treat this failure as a change in the path, that we would create a comic with my ideas.

Furthermore, I had a dream where I travelled through space.  There I saw two interwoven pyramids, one white and the other black.  I enter into this image and I am converted into the pyramids, [before] taking off in a galaxy of light.  With all this material we started the work on The Incal.

Besides The Metabarons and The Technopriests, are there any other characters from The Incal you’d like to explore in comic form?

For the children  I would like to expand the world of the concrete birds with Deepo as their hero.  For the adults I would like to further explore the repulsive adventures of Gorgo-le-Sale [note: he did the latter in 2014, in the third volume of his Final Incal series with José Ladrönn].

Prior to The Incal you collaborated with Moebius on a wonderful horror story called The Eyes of The Cat.  You have said that this was to be the first part of a trilogy.  Do you intend to return to the story?

Moebius is extremely busy in producing drawings of this complicated quality.  Maybe I should try to do the sequel with a different artist. How do you like this?

A few years ago I’d have flinched at the notion of anyone other than Moebius illustrating a sequel, but – after seeing Zoran Janjetov’s stunning artwork on Before The Incal – I’ve learned to loosen up a bit.  You once said: “I ask of film what most North Americans ask of psychedelic drugs.”  Do you ask the same of comics?

Yes.  You just have to read the Castaka of The Metabarons number 7.   It is a true delirium!

Your stories are always rich in sub-text and symbolism.  Would you prefer your audience to actively seek out these ‘hidden meanings’, or do you prefer it to go by unnoticed, to bypass the conscious mind?

I write in multiple levels at the same time.  I direct myself to different levels of the readers in the same story.  The kids have fun with it, the cultured adults can find hidden messages that I place on every page.

While The Incal and The Metabarons share the same universe, they are two very different animals. Looking at your various collaborations, I’m struck by how effortlessly you seem to adapt your stories to the strengths of the artists you work with.  How do you set about achieving this creative synthesis?  I imagine it differs from artist to artist…

Yes, it differs for every artist.  When I begin a new partnership I investigate the mentality of the artist.  I find out about his preferences, what he does not dare to imagine, his methods, his emotional life, his ideas.  Last, in a concealed fashion I psychoanalyze him.  Soon I write a story tailored to his psyche.  The subject matter has to entice him, he has to be able to identify himself with the characters, etc. I don’t write just for myself: I write for an artist.  And through the artist I fix them up to express my views.

You’ve worked with some of the most talented artists in the business including Moebius, Giminez and Georges Bess.  Are there any other artists you’d like to work with?

For the moment I am like a man that is satisfied with his admirers and who does not need anything else.  Nevertheless, I enjoy working with talented artists.  But now, since I am extremely busy, they would have to come and get me.

If you could go back in time, what artists from comics’ past would you work with?  I ask this because I recently re-read Moebius and Stan Lee’s Silver Surfer comic and found myself wondering what strange magic Alejandro Jodorowsky and Jack Kirby could have created together…

We’ve seen some teasing glimpses of Travis Charest’s breathtaking artwork on your forthcoming Metabarons: The Dreamshifters book.  How did this collaboration come about?

Through one of these magical coincidences – Fabrice Giger, my editor, being apart for thousands of kilometres – we had the same idea at the same time: that Travis should illustrate the Dreamshifters. Fabrice suggested it to Travis and he accepted immediately, even came to live for some time in Paris to work on it. 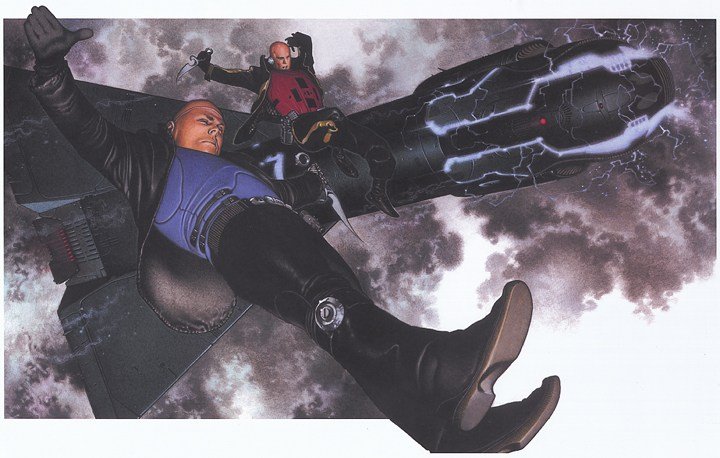 Could you give us a ‘teasing glimpse’ into the story?

Impossible! I am capable of writing any type of long stories, but I am not able to deliver summaries.

I believe that this is the first time you’ve worked with an artist more commonly associated with American superhero titles.  Are there any other artists who work in this genre that you admire, and, if so, can you envisage working with them?

There are four artists that I admire, and with whom I would like to work together, however, since they are sometimes artists and writers, they do not need me for anything.  The deceased Harold R. Foster.  The super neurotic [Robert] Crumb.  The classical Stan Sakai.  The profound Will Eisner.  Four genii!

Are there any comics you are currently reading?  Any recommendations?

These days I broaden my life in reading Lone Wolf and Cub.

Did you read comics as a child?

Another thing that distinguishes you from other filmmakers who write comics is the fact that your earliest work in the field – such as Fabulas Panicas Weekly in the 1960s – actually pre-dates your movie career. Would you be kind enough to tell us how you first became involved in writing comics?

In the Fifties an artist from [Cuban newspaper] Vanguardia declared that comics are the poetry and the novels of the future.  He believed it to be a form of art as big as the movies.  Taking advantage of my celebrity status in Mexico, I proposed to a big newspaper to illustrate in their weekly culture segment one comics page per week.  They hired me immediately and so we continued for five years.  We had one million of readers each week.

When legendary film critic Pauline Kael reviewed El Topo, she linked Fabulas Panicas to the works of Robert Crumb and other 1960s underground comic creators.  At the time, did you see yourself as part of this movement?

I never considered myself [aligned] to any movement nor to any political party.  I have an anarchistic spirit or, better, am very liberated like a Metabaron. However, I collected all the underground comics.  The only one that communicated with me (and had a homage to El Topo) was by Spain Rodgriguez.

With Fabulas Panicas you illustrated your own scripts.  Have you ever felt the urge to return to the drawing board?

No. Watching Moebius draw I suffered an everlasting complex.  I feel ashamed of my drawings.

Now that films based on comics are back in vogue, have you ever thought of adapting one of your own titles to the big screen?

I prefer that others take on to it.  The level of idiocy when Hollywood adapts a comic script repulses me.  Actually, for me, I see greater artistic possibilities in creating a comic than making a movie.

Personally, I think The Metabarons would work better as an opera than a movie.  As an artist who has worked in many fields, can you imagine any of your comics being adapted for a medium other than film?

What idea is this, wanting to adapt one art into another form of art?  Comics are comics and they are doing perfectly well in continuing to be comics.

Have you ever considered returning to characters from your movies in comic form?

Humanoids English-language publication of The Metabarons has created a new generation of Jodorowsky fans.  Many will be eager to see your movies El Topo and The Holy Mountain, but will be surprised at how damnably hard they are to get hold of.  For the benefit of those unfamiliar with the grisly details, can you tell us why these films have been hidden away from the public?

These films are in the pseudo-legal possession of the producer Allen Klein. This man hates me to death and he has decided to deny the public from watching my movies.  At the moment we are in a legal battle, where I am trying to recover what is mine: the right to show these movies.

In a television interview with Jonathan Ross a decade or so ago, you described how you felt after seeing David Lynch’s Dune movie.  I seem to remember it made you laugh for hours.  Did you see the Sci Fi Channel’s recent adaptation and, if so, did it provoke a similar response?

All this belongs to the past and it does not concern me anymore.  I watched one minute into it and I turned the TV off.  It wasn’t the Martians that invaded our planet, it was the imbeciles.

Your Dune project featured an amazing cast of collaborators including Orson Welles, Salvador Dali, Moebius and H.R. Giger.  If you had the chance to make an epic science fiction movie now – and money was no obstacle – who would you recruit this time around?

As actors I would only recruit talented people, but not famous.  I find that the poison to the movies are the stars.

While we’re on the subject of your films, can you provide us with a status report on Abelcain [AKA The Sons of El Topo]?  Is Marilyn Manson still involved?

Yes. M. Manson is still involved.  However, the weight remains on my shoulders of getting the money together for the production.  I don’t know if I will succeed in getting it.

Let’s hope you do.  Thanks for taking the time to talk to us, Alejandro, and I hope you continue to shock and amaze us for many years to come.